Is boredom in the workplace “the new stress”?

Surprisingly, boredom is making an appearance in recent workplace studies. University studies have found that boredom is the second most commonly hidden workplace emotion after anger and according to Sandi Mann, a senior psychology lecturer at the University of Central Lancashire, modern workplace are becoming more boring. 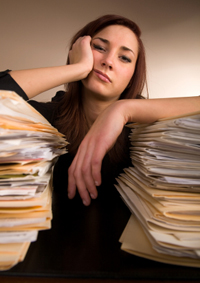 Being bored at work is normally associated with menial jobs but new research has highlighted that it now affects high-performing employees.  Sandi Mann told CNN that “Changes in legislation all the time leads to bureaucratic procedures that people find boring," she explains. "We seem to be in a culture of having meetings, which a lot of people find boring….. We have more people working night shifts, which are more boring because you've got fewer people to talk to." Some have even claimed that it could lead to stress which ultimately leads to illness.  "It's as stressful as stress but, whereas stress management courses are 10 a penny, organizations are terrified to admit their workers might be bored," Sandi Mann explains.

50% of the 102 office workers surveyed said boredom could make them leave their jobs and almost 80% said being bored causes them to lose concentration and more than 50% are prone to make mistakes when bored. To battle boredom, workers are also turning to unhealthy snacking at work with excessive coffee consumption or cigarette breaks.

To combat boredom, employers should look to introducing workforce management solutions such as empowerment, job rotation and multi-skilling. Regular training is another method to stimulate employees